7 Sultans Casino is a pretty special casino in that it’s been about since 1999. Now, as many of you will already know, this makes it one of the oldest online casinos currently in circulation and the oldest from the Fortune Lounge Group. Given how erratic the industry can be and how often new casinos open (and close) their doors, being around for almost 20 years is a pretty amazing feat in our opinion, so we have high hopes.

Throughout this review we will be looking at how well the casino performs and also what’s made it tick over such a long period of time. It’s worth noting that the casino has seen some pretty major upgrades over the last couple of years, so if you haven’t been on the site for a while then it may throw a few new surprises at you. 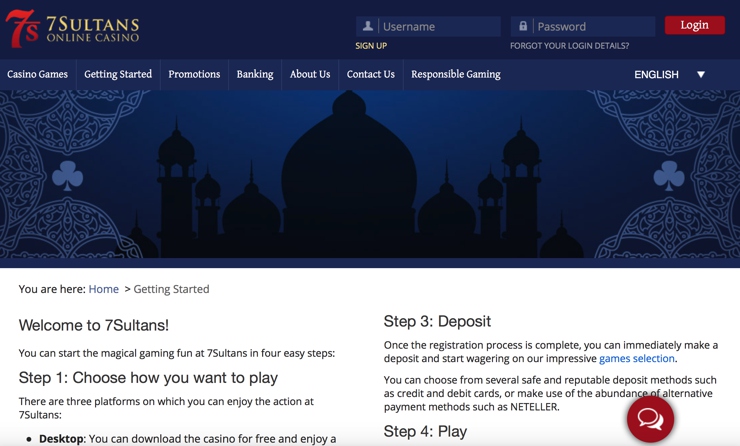 The casino offers a good range of promotions to choose from, although they don’t always run for that long. What you will find is that each week they offer up a new promotion and then you have that week to claim it and clear it. These offers can range from bonuses to free spins on certain games. We recommend that you sign up to the casinos newsletter as this will let you know what’s going on and when.

As soon as you register your new account and star playing real money games you are going to be able to tap into 7 Sultans rewards program. The program means you will be able to cash in your points for cash prizes and also bonuses. The more points that you mange to earn the more lucrative the prizes will be.

There are 4 bands in total, which include Silver, Gold, Platinum and Diamond. As you work your way through each level you are going to be able to earn points quicker and also gain access to more lucrative rewards. These might include cash prizes, weekly promotions, birthday bonuses, accelerated earnings and monthly loyalty bonuses.

The site is run by Microgaming, who are one of the biggest operators in the industry at the minute. This allows 7 Sultans to choose from hundreds of games within the casino and also make sure that the games on offer are of the highest standard. As it’s using just one provider it means that the casino is able to offer up games via their browser based casino and also as a download option, should you wish to sue this.

You are going to be able to access a good range of casino games from their mobile site, which can be accessed simply by heading to the 7 Sultans casino in your smartphones browser.

The site includes a number of features as well with the most usable being that of the search function. With hundreds of games to choose from, finding the game that you want can be an arduous task, so the search feature allows you to save time and jump straight in to where you want to be. It also allows you to favourite your best games, meaning that when you log in you can see just the games that you want to play. This is probably the most useful feature on site, especially if you are playing often and only use a handful of games.

You are going to be able to choose from around 500 games in total, which coming from one of the best developers in the industry, means that the games are really going to be on point. You will also notice that the casino often serves up a number of new games as and when they are released by Microgaming, which should keep the site feeling relatively fresh. Although, we will say that we don’t think Microgaming release titles as often as they should, but that’s another matter. 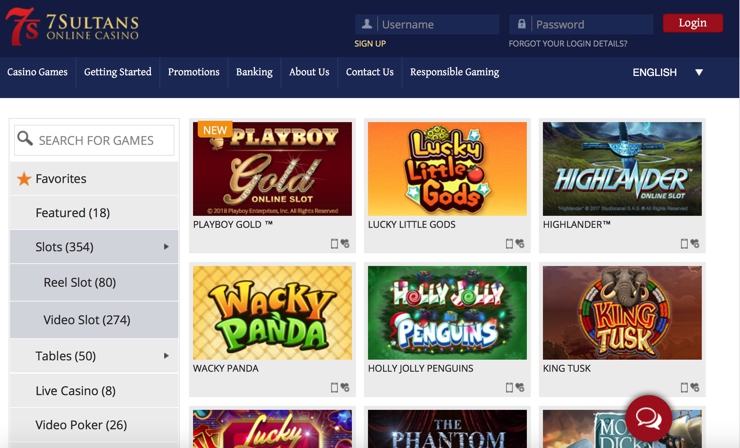 As per usual, the slots section sees the most action at any casino and 7 Sultans is no different. You get 324 games to choose from, which is a really solid number and again, the quality of the games really cant be faulted. One of the downsides is that because Microgaming is popular, there are literally hundreds of casinos that will have the same games on show, which does make it feel slightly repetitive.

As standalone games, they cant be faulted though and we enjoyed tapping into some of the classics such as Thunderstruck II and Wild Orient, to name just a couple.

Fans of blackjack are really going to be in their element with 7 Sultans as you get no fewer than 27 different variations to choose from. The games are all really solid as well, with some of them including European, American, Vegas Strip and Pontoon.

Roulette is slightly more dubbed down, but you still get 8 variations to choose from. The software within the games are really what sets them apart from the competition though and we can see why so many of the high rollers tend to lean towards playing Microgaming tables than any other provider.

Video poker carries on the same theme as the other games with 24 variations to choose from. These include Jacks or better, Tens or Better, Aces and Faces, All Aces and Bonus Poker, to name just a few.

With 16 progressive jackpots on offer, there are few that can really rival a Microgaming powered online casino. The standout games are that of Mega Moolah, and Major Millions, both of which fetch huge jackpots of well over $1,000,000 pretty much every time that they drop.

The 7 Sultans brand is one that will be familiar to so many within the online casino industry. The success that they have seen has had a huge affect on how successful the Fortune Lounge Group has been in return and you would have to suggest is the main reason why they are at the stage today.

The company are based out of Malta and are also regulated by the Malta Gaming Authority.