There would be little argument when we say that the online casino industry has to be one of the toughest to break into within online gaming. The sheer number of casinos that you can now pick from is fairly overwhelming, so when someone new comes along they have to offer up something that hasn’t been done before or simply, offer what’s already there, but executed better.

LeoVegas have taken it upon themselves to do both of these; first offer up a mobile friendly online casino and second, to provide a fresh face in their online portfolio of games that are on offer. The company have only been about since 2012, which is no time at all really, but they have already made heads turn and built up a pretty impressive portfolio of players already in that time. 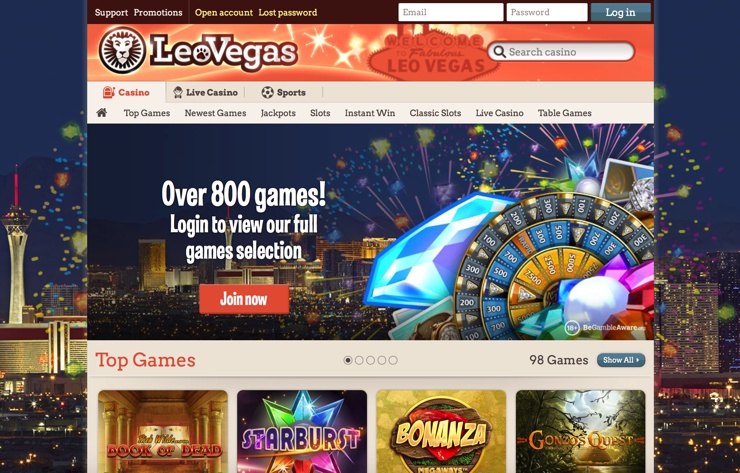 Like most online casinos, LeoVegas are going to shower you with a number of promotions that they run throughout the year. A lot of these are time sensitive and will be targeted around holiday season (Christmas, Easter, birthdays, etc.) so its worth going to check on the site to see what’s available and when.

You will be able to get access to the LeoVegas VIP scheme when you sign up with the casino. The VIP section is where you can rack up points for playing on games throughout the casino and then being able to exchange them in the VIP shop. The main objective is getting enough points to get into the VIP section and then working through to get as high a level as possible. At the end of each month, there will be a draw made for each level in the section for prizes to be handed.

LeoVegas have tapped into a huge range of casino software developers to allow them to offer up the best games in the business. These include Bally Technologies, CryptoLogic, Evolution Gaming, IGT / Wagerworks, Microgaming, NetEnt, NextGen Gaming, Play’n GO, WMS and Yggdrasil Gaming. The software is only available via your browser or can be downloaded to any mobile device.

It’s also wroth noting that they do include a handy search feature for the casino as well, which is very much needed when you see just how many games they offer up in the next section. We also liked that you could try each game before playing for real money, allowing you to get a feel of the how it works and the rules of each game before investing any money.

The range of games that LeoVegas has on offer is really what the casino is all about. To say its impressive is an understatement, with over 500 to choose from. What’s great is that, as you will se below, the games are well spread out across a number of platforms, offering up something fro literally every user within the casino. The games on offer stay pretty constant and whilst they do add and remove games, it’s possibly not as regular as some, although because they have so many, it doesn’t really need to be. 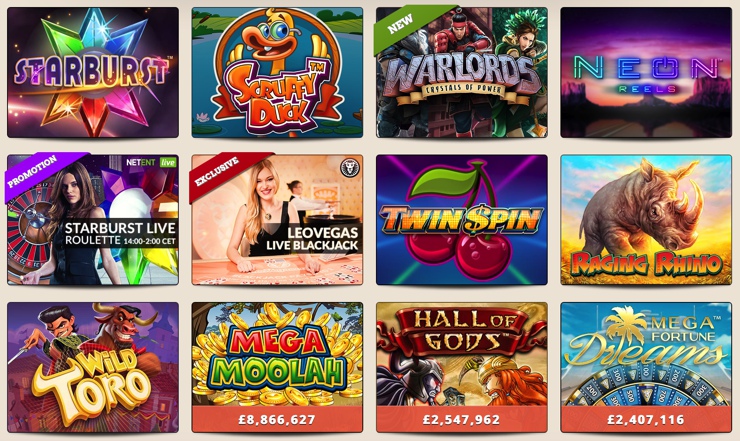 You’re going to be able to choose from over 450 slots within LeoVegas and what a range they have. They do vary in quality though, which is something you need to keep an eye out for, but as we mentioned earlier, you will get the chance to try the game before you play for real money, so you should know what you are letting yourself in for prior to playing.

If you are a lover of blackjack, the LeoVegas might just have the best range of games in the industry. There are a whopping 21 variants on offer and it’s clear to see that they have tapped into every one of the software providers that they use to create this massive range. Some of the variants include 21+3, 6 in 1, professional series, pro series high stakes, buster bet, lucky ladies, perfect pairs, suit ‘em up and 3 different single deck games.

The range of roulette games is even more impressive than the blackjack lot, with a stunning 29 games on offer. This has to be one of the most in-depth ranges of games we have seen! The variants include 3 wheel, American, Live VIP, double bonus spin, French, European, London and even Monopoly roulette.

The live games section is an area that LeoVegas have really been trying to improve over the last few months and with 30 titles to choose from you’re never going to be left wanting. You can select from roulette, blackjack, baccarat, craps, three card poker, Caribbean stud and casino hold’em.

You will be able to choose from 15 jackpot games in total, which are all network based, meaning that the figures included for each jackpot are simply massive. The standout titles include that of Mega Moolah (the highest paying slot of all time), Mega fortune, Hall of Gods and Mega Moolah ISIS (Queen of the slots).

LeoVegas is synonymous with having a plethora of jackpot wins, but the biggest of them all came in July 2015 when a lucky winner from Gothenburg managed to win €4,583,260 from just one spin on the Mega Fortune Dreams game.

LeoVegas has to be one of the biggest success stories over the last 5 or so years within the online casino industry. They started life in 2012 as another up and coming casino, but now they have to be regarded as one of the best in the business.

The company is run by the LeoVegas Group and in turn a section of the business is to solely invest into companies that are looking to promote gaming on mobile. This is the direction that LeoVegas first took when starting up, so it’s obviously what the company are sticking to moving forward.

The company is based out of Sweden and whilst the Euro market is very dear to their hearts, they have big plans to expand the brand worldwide and already accept players for a number of countries; in fact only players from Estonia, Hungary, Russia, Ukraine and the Unites States are currently restricted.

In the few short years since the company was founded they have won several highly acclaimed casino awards including Casino Operator of the year in 2016 at both the International Gaming Awards and the Gaming intelligence Awards, Mobile Operator of the year 2016 at the EGR Nordic Awards and finally, Best Innovation in Mobile and Tablet – the same EGR awards in 2016.